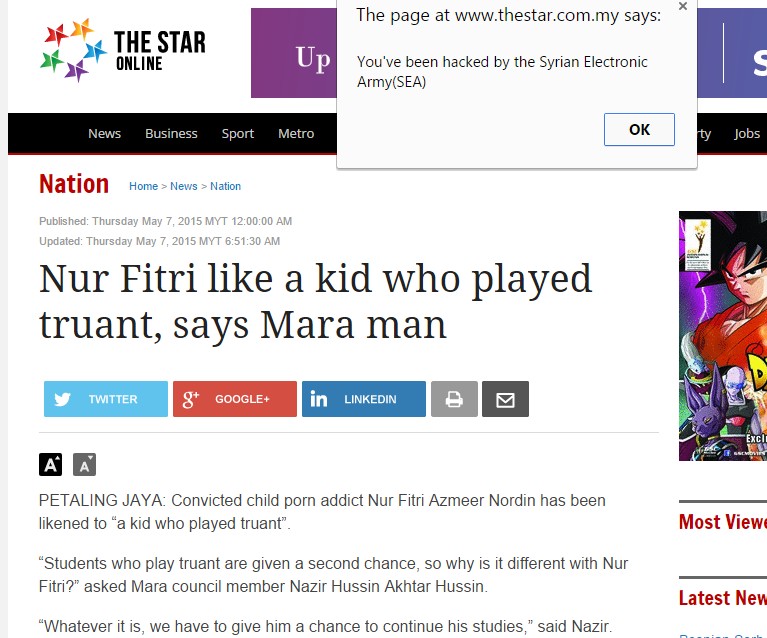 Like the entire population of Malaysia and everyone else on this planet except the few strange people from MARA (who obviously do not have children of their own, or if they do, have an extreme dull sense of what morality is) – I was keeping up with the story of the Malaysian Paedophile case. Everyone knows about it. Nur Fitri was busted and convicted as a paedophile (one who sexually abuses children – granted, he was caught with images, not actually abusing, but its just as bad), and MARA (the organisation that had given Nur Fitri the scholarship) went on the record stating that he deserves a second chance because he is a Maths Genius and an asset to the country. And that being convicted as a paedophile is like playing truant at school.

Anyway, while trying to get to the Star online, the message popup received was You’ve been hacked by the Syrian Electronic Army.

It’s actually not Star that got hacked. They attacked Gigya, a customer identity management platform that is apparently used by The Star. This is an attack that is prevalent since last year so I am not sure why Star is still having this issue. Any link to Gigya gets pointed to SEA’s images and servers. A quick look at Star’s load up and we see a whole bunch of references to Gigya.

Star, you need to remove that component from your site!

If you need help in testing your site for vulnerabilities, please contact us at avantedge@pkfmalaysia.com